YOUTH – They will surprise you!

Last Sunday my home church (First Baptist Church Dalton, Georgia) had “Youth Sunday.”  Many churches do something similar in which the youth are in charge for a day.  (With proper supervision and ONLY for a day, mind you!  We wouldn’t want them to really be in charge!)

Sitting there in my pew I reflected back to when I was a youth and we had Youth Sunday.  Keep in mind that those memories are now only vague, and definitely in black and white, not color.  I remember teaching Sunday School.  “Teach” was not so much the operative word, now that I have a better understanding of the cognitive approaches to imparting knowledge and understanding.  I had “the” Men’s class that day.  What could I tell them that they did not already know?  How would they be moved to a deeper Christian faith by my feeble attempt to pontificate the Word?  It didn’t matter in the long run; they were very supportive and appreciative of my attempts and the encouragement I received may have benefited my openness to hear God’s call into ministry.

Like many adolescents there was apprehension abundant.  However, each participant “performed” wonderfully and we “had church!”  Some read Scripture, many sang in the youth choir, some played percussion instruments; one very talented young lad played the organ (how does one do that anyway?  It takes hands AND feet!)  A couple even prayed – out loud!

Until I became comfortable speaking in public, I was very timid about praying in public.  After all, I’m talking to the Almighty on behalf of all of us in the room.  These pray-ers gave thoughtful consideration to the words they were to utter.  Perhaps they were coached by the youth minister or other leaders.  Regardless, they were well done.

Not many pray-ers, myself included, impress me in the hearing of the audible prayer like one this Sunday.  The young man spoke clearly and eloquently.  He demonstrated for many how to pray an “opening prayer” or “invocation.”  He articulated that we were all entering into the opportunity to worship God.  He asked God to “aide us to hear your Word this morning.”

WOW!  That’s it, I thought!  In all we do in our designed one hour of “worship” on Sunday morning – singing, praying, reading litanies, hearing a sermon – we are there to hear a word from God.  It cannot be done unless God Himself aides us so that we actually “hear” it.  This aide could take many forms.  The aide I normally need is to clear my mind of distractions and focus on the moment.

God wants us to hear His Word through many means each and every day of the week.  It may be in the reading of Holy Scripture; it may be in silent (operative word!) meditation; it may be in singing hymns and spiritual songs; it may be in caring for another person who has a need.

Oh God!  Forgive me for not hearing you like I should. Aide my hearing today so that I do not miss what You have for me today!

"Ducks on the Pond" 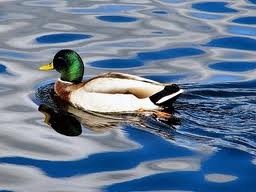 Sitting in a rocking chair at the Terrace Hotel at Lake Junaluska Retreat and Conference Center one morning I was overlooking the lake.  Behind the shimmering luster of the water were mountains, small and grand peaking out through the early morning fog.  A few early risers were exercising along the path around the lake, workers were beginning their tasks of maintenance, housekeeping and the like.

I observed one lonely duck floating across the lake.  That in itself was not that inspirational.  What drew my attention was the ripple effect out behind it.  This small little creature wasn’t creating a large wake as it glided across the water.  But what it did still ventured out long and far behind.

The LORD reminded me in that moment that my actions and thoughts are like those ripples of water.  Whether good or bad, those actions, thoughts and words extend out and affect long and far after I have spoken them or acted in such a way.

The obvious was to turn inward and reflect on the negative ones, yes, sin.  Forgive me LORD, purify me, and cleanse me.  Reveal to me those un-confessed.  Restore to me the joy of my salvation by your love mercy and grace.

Without pride, however, I realized that there have been “good ones,” too.  LORD, may they be only reflective of you.  Let me have no selfish pride.  Help me to have more good ones than bad ones today, rippling out positively touch my world today.
AMEN
Posted by Tommy DEAL at 1:33 PM No comments:

“The moon and stars suspended in space.”

“When I gaze into the night skies and see the work of Your fingers; The moon and stars suspended in space Oh, what is man that You are mindful of him? You have given man a crown of glory and honor and have made him a little lower than the angels You have put him in charge of all creation The beasts of the field, the birds of the air, the fish of the sea But what is man, oh what is man that You are mindful of him? O Lord our God, the majesty and glory of Your name transcends the earth and fills the heavens O Lord our God, little children praise you perfectly and so would we - and so would we. Alleluia, alleluia, the majesty and glory of your name Alleluia, alleluia, the majesty and glory of your name Alleluia, alleluia!” “The Majesty and Glory of Your Name,” Linda Lee Johnson and Tom Fetke, © 1979.
Did you gaze up into the night skies during March?  Have you ever seen such a sky? Not unless you are umpteen hundred years old.  Apparently we experienced a phenomenon called a “conjecture.”  I’m no astronomer, but I am impressed.
Humankind has been amazed at the heavens from the beginning of time. From the first chapter of Genesis we read how God put each one in place (Genesis 1:14).  Intelligent man quickly learned how these “things” could be used to guide them.  Very wise men used an exceptionally bright one to find the Christ Child.
The phenomenon of the March sky was amazing!  Venus and Jupiter and the Moon were all right up there together bright as can be (Is this the “Age of Aquarius”?  Look out Fifth Dimension!)  These planets, along with little Mercury, and the Moon all became very apparent in our night sky.  They were so bright.  It made me think “what is really out there?”  For those of us who are followers of the One true God, we know Who is out there?
But, He is not just “out there.”  He is here, right now, with you and me.  But why don’t we recognize Him?  Perhaps it is because we aren’t reflecting His Light correctly.  Isn’t it written, “You will know them by their love for one another”? And, I might add, their love for others.
If we do not have love for one another (and others not like us), then we are nothing more than a resounding gong or a clanging cymbal. Or worse, we are non-reflectors of His light.  Wouldn’t our world be better served if we were “moons” reflecting His love and light?  What if people gazed into our lives and it guided them to the One whose Light we reflect?
Father, forgive me for dulling the reflection of Your light.  Help me to love others so that they begin to see You and yearn for You.
Posted by Tommy DEAL at 1:52 AM No comments: